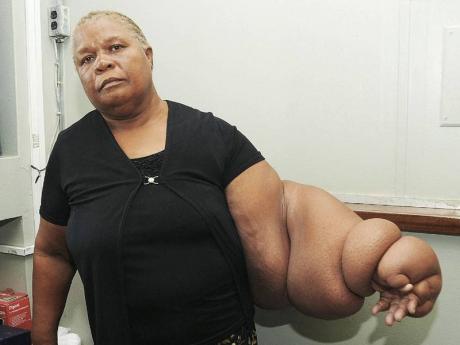 Melrose Pusey, a breast-cancer survivor, tells Flair that many times she gets a 'fever' in the arm, and it, subsequently, results in a lot of pain. - Ian Allen/Photographer 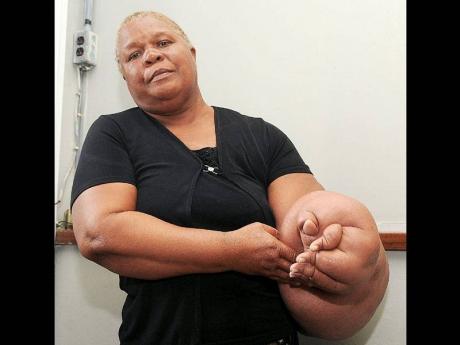 Melrose Pusey shows her left arm that has continued to swell since she did chemotherapy. - Photos by Ian Allen/ Photographer 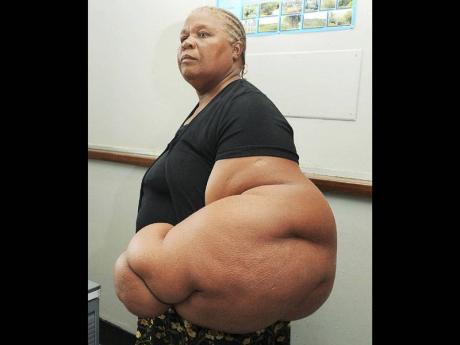 Sometimes the pores on Melrose Pusey's arm become so enlarged that fluid oozes from them.
1
2
3

When Melrose Pusey felt a lump in her breast in 2006, little did she know that six years later the size of her left arm would have increased by 25 pounds. But in spite of the affliction, she has maintained remarkably high spirits and a strong faith that God - and medicine - will heal her.

Flair met Mrs Pusey just over two weeks ago when she came to The Gleaner to share her plight and seek some help. Last Thursday, accompanied by her daughter, Claudine Lattery, she returned to share her story.

"When I first felt the lump, I did not go to the doctor right away. I waited for abour six months because the area began to burn me," Pusey said, adding that the first doctor dismissed it as nothing serious. "When I went back to another doctor, he ordered a biopsy at the Chest Hospital; two weeks later, she received a phone call that the results showed it was cancer. "Surgery to remove the breast at the Kingston Public Hospital came two weeks later and that was followed by chemotherapy after the area healed.

Headlines Delivered to Your Inbox

Sign up for The Gleaner’s morning and evening newsletters.

But Pusey said right after the chemotherapy, she noticed that her left arm began to swell. There was no explainable reason for the enlarging arm because the doctor said it had nothing to do with the cancer. Her breast had healed and she felt well, she was not lifting heavy objects, just doing the prescribed exercises, yet the swelling continued. And to make matters worse, the doctors could not offer a reason for it.

Claudine told Flair that they were urged to buy a special sling to hold the arm in place and they did, but the sling broke with the weight, and several such slings later, there is no ease. To sleep comfortably at nights, Pusey was advised to elevate the arm on a pillow. She has tried many positions, but to no avail because of the discomfort and the difficulty in manoeuvring it. She is unable to sit or stand for long because she gets back and shoulder pains, so spends most of her time lying down.

"Sometimes I get a fever and the arm itches and hurts when it's inflamed. I also notice that sometimes the pores open up and a fluid oozes from them," Pusey said. And, she revealed that she has become so frustrated that she has even changed her diet and gone to a doctor who specialises in herbal medicine. But still to no avail. Many things she used to do have stopped. These include travelling on the bus, because the ride is so rough it triggers the pain.

To add to her woes, Pusey is no longer able to work because she can't. She is now only able to help with cooking and folding clothes after they have been laundered. She is married but her husband, who is a handyman, barely makes enough for them to send their 17- and 12-year-old children to school. "He worries over me and he has many sleepless nights," she said. Claudine, her oldest child, is a teacher and she helps in whatever way she can, but she is also married with her young family. So Pusey worries and so does her mother. Claudine says she cries sometimes, but never in front of her mom.

"I used to cry but when I see how Mommy is dealing with it, I take strength from her; she is not a burden to me. I want her to know that I love her and I am glad I am around for her. She said it is a good thing that they all live within close proximity of each other so the family members are there when needed, Claudine said.

The determination and love for her mother are evident as Claudine stressed that she believes there is a cure out there. She spends a lot of time surfing the Internet to find cases similar to her mother's and said she would give up her last dime to get help for her. She said she has seen similar cases on the Internet, but none as bad as her mother's. "We don't have the funds but I would love to find a doctor who can help her. This kind of medical care is expensive and many times I wonder if our socio-economic circumstance were better, the doctors would treat us with more urgency," she said close to tears.

Mrs Pusey's clothes no longer fit because of her arm, but she is still upbeat. Asked what she would like most besides a cure, she said a good-paying job for her husband, because many days he survives on crackers and water in order to save his money to send the children to school.

"I am not giving up, even though the doctors seem to have given up on her," said Claudine, who has also written to the American Cancer Society for answers. "I just want to find a doctor who can help her; I won't get another mother, so whenever I hear of something positive, I will keep on trying," she said.